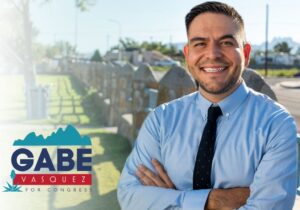 Gabe Vasquez beats his right-wing GOP opponent by one point in the first major polling released for Congressional District 2 (CD2). The district was redrawn last December to include much of Albuquerque’s West Side and South Valley.

Vasquez beats his Republican opponent by a point even before voters being polled are informed about her anti-choice, anti-immigrant views and votes or her position on the January 6 insurrection. A Trump ally, Yvette Herrell of Alamogordo  was a state representative from 2011-2018 and sponsored the “Born Alive Infant Protection” bill and a parent notification of abortion bill in 2017, limits on partial birth abortion in 2018, among other bills, including reinstating the death penalty. In Congress she’s voted against formation of the January 6 committee, against the John Lewis Voting Rights bill, and against Trump’s impeachment. After voters hear more about her, Gabe wins by four points. And that’s in the August polling fewer than 100 days before the election.

Vasquez is a noted environmental activist and was instrumental in the designation of the Organ Mountains Desert Peaks National Monument, protecting it from harmful development and safeguarding it for future generations.  He’s also a progressive city councilor who was elected in 2017 with over 70% of the vote, delivering millions of dollars in investment to create and improve parks, updating the district’s infrastructure, promoting policy that created thousands of jobs, and helping craft a comprehensive development plan that focused on lifting families out of poverty. Vasquez has also served as the executive director of the Las Cruces Hispano Chamber of Commerce, worked in public lands conservation, and as a policy advocate promoting child welfare and family wellbeing at the federal level. Although he has a distinguished and consistent record of service, Vasquez is seeking national office for the first time.

CD2 was noted early by the Democratic Congressional Campaign Committee as one of the top pick-up opportunities in the country. The DCCC named Vasquez to its “Red to Blue” list of top candidates in March. He has promised, “I will always put working New Mexico families first, while Yvette Herrell’s priorities are pushing a national abortion ban with no exceptions for rape or incest and palling around with January 6 insurrectionists.”

“This election is a choice,” Vasquez has pointed out.  Indeed.  Even with Vasquez’s success in polling, Democrats in New Mexico need to do all they can in this election in a district that, for the first time, includes parts of Bernalillo County. There’s a postcard-writing campaign being organized, and you can help with that by contacting Blue CD2 at Blue CD2 Postcard Writing Whizzes. Volunteers buy their own postage and commit to a one-week turn-around to mail the postcards, but there is also help for those willing to help but unable to pay.  For other ways you can help, see https://www.bluecd2nm.com/join-our-committees.html.

For more on the Vasquez campaign, contact in**@ga*************.com.  You can also donate to this important campaign through the website.