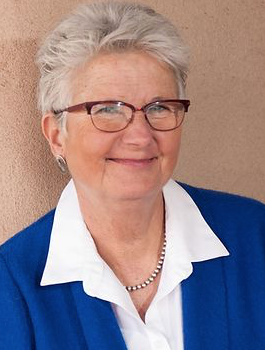 Only 200 or so Bernalillo County Democrats live in Liz Stefanics’ senate district, which stretches 190 miles from San Miguel to Lincoln County.

But every one of those Democrats and every other Democrat supporting Stefanics’ campaign as a volunteer or contributor have the opportunity to make an important difference to New Mexico.

All Stefanics supporters can help ensure this strong, savvy, hard-working senator returns to the legislature. And they can block her opponent, Joey Tiano, in his mission to “preserve the dignity of the natural family,” castigate legislators as “socialist communists,” and use his elected position as a soapbox to claim that George Floyd died of a drug overdose rather than at the knee of a Minneapolis policeman.

Senator Stefanics, who served in the legislature from 1993-1996 and as a Santa Fe county commissioner 2009-2016, now seeks re-election to represent the five-county District 39. She’s been chair of the senate conservation committee, where she sponsored the Community Solar initiative and established a working group to set guiding principles for such programs in the future. She directly serves her Bernalillo County constituents in Chilili (many of whom are part of that ancient land grant) as chair of the interim land grant committee. The Senator also brings expertise to investments and pensions oversight, legislative health and human services, water and natural resources, revenue stabilization and tax policy committees. She is especially sensitive to the challenges facing rural people—among them the need for reliable internet access for education, health care, jobs and job development. Creating service delivery systems that actually work for the largely poor rural areas of New Mexico is a significant focus of her progressive agenda.

Endorsed by more than a dozen progressive groups, from NEA-NM and the American Federation of Teachers (AFT), to Conservation Voters, Sierra Club, Planned Parenthood and labor groups, Sen. Stefanics is an educator, mediator, and advocate with solid health policy, workforce development, and housing credentials. Former director of the state’s risk management department and health policy commissions, deputy secretary of the state Human Services Department, chair emeritus of the state’s Human Needs Coordinating Council, and faculty for the Robert Wood Johnson health policy program, Liz Stefanics has dedicated her powerful intelligence and creative policy making skills to New Mexico for over 30 years. She seeks and deserves another term —and support even from those who can’t cast their ballots for her.