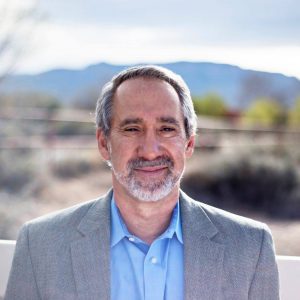 Daymon Ely has lived in Corrales for more than three decades. A lawyer for over 37 years, and still practicing today, he has worked tirelessly to ensure public justice throughout his career. He has also done an outstanding job during two terms serving as the Democratic voice for NM House District 23.

Since winning the HD23 seat away from a Republican incumbent in 2016, Rep. Ely has put forth strong initiatives to benefit all New Mexicans. These include establishing the ethics commission, criminal justice reform, conservator/guardianship reform, the extreme risk protection bill (the so-called “red flag” bill) and protections for working people.

Seeking to help NM citizens survive and recover from the economic pain of the COVID pandemic, Rep. Ely has most recently sponsored legislation to preserve rent control, impose a moratorium on evictions, and assist small businesses.

Going forward, Rep. Ely sees both NM’s need and its potential to:

Daymon Ely’s Republican opponent in November is Ellis McMath, a retired Albuquerque Reserve Police Officer, and current Concealed Carry instructor whose campaign leads off with a boast of being “familiar with what makes criminals fear.” McMath is against gun control, pro right to life, and for lowering taxes as a supposed way to increase personal freedom. He states: “I am against government overreach and progressive socialist ideals.”

His opponent has been endorsed by NM Right to Life.