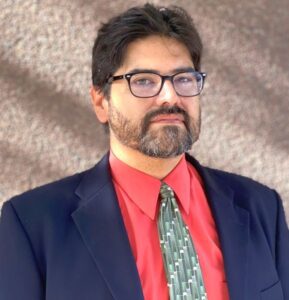 My name is Todd A. Olmos, and I have been a registered Democrat in New Mexico since I was first eligible to register to vote, in 1992. I am a third generation New Mexican, I was born in Clovis and moved to Albuquerque in 1985. I obtained my undergraduate degree and Juris Doctor Degree from the University of New Mexico. I am only the fifth person in my family to attend college, and I am the first to obtain a doctorate degree.

I am running for this position because I believe in public service. I desire to change my role from advocate working for the Public Defender’s Office to judge of the Metropolitan Court in order to continue this public service. I suffered a massive stroke at the age of 28. I was in a coma for five days, and when I awoke the right side of my body was paralyzed. I was fortunate that my mental faculties were not affected, (I even remembered, shortly after gaining consciousness, to ask about the results of the election that happened while I was in the coma). I had to relearn how to breathe on my own, to swallow, and to walk again. This experience made me more appreciative of my life and also made me question my purpose. After five months of hard work in rehabilitation, I managed to get back to my job. At the time, I was working for a call center as a supervisor, but I started wanting a more meaningful direction for my life. I had an undergraduate degree, but decided to go back to school to explore other career possibilities. I took business courses, counseling courses, and computer courses, and then my significant other suggested I explore the law. I began taking paralegal courses at CNM and eventually got my Associate’s Degree. An externship opportunity with Legal FACS, a non-profit organization, allowed me to apply my learning to help indigent people. I helped them to fill out forms, and I assisted them with the filing processes to obtain divorces, child support, orders of protection and other domestic matters. I enjoyed helping so much that, after my externship ended, I stayed on at Legal FACS as a volunteer. When a position opened up I was hired as their paralegal. I continued on with the study of law and went to law school. I found that I really enjoyed criminal law and did externships with the Law Offices of the Public Defender of New Mexico (LOPD). After I graduated, I was hired by the LOPD and have been working in their Metropolitan Court Division ever since. I continue to enjoy serving New Mexicans who need help with their cases and guidance with navigating the court system.

I have been a public servant my entire legal career. As an attorney with the LOPD, I have been representing New Mexicans for more than ten years. I have appeared multiple times a week in the Metropolitan Criminal Court. This includes nearly 100 trials.

As an attorney exclusively practicing in Metropolitan Court, I have seen the workload and how it is a special place. Many of the people seen at this court are having their first introduction to the criminal justice system. This court has the ability to creatively resolve issues and cases, often through the use of its specialty programs. I have participated, as a representative, in many of the specialty court programs and have seen firsthand the good work done.

I have the necessary skills, experience, and knowledge to be a good judge. I have practiced in front of numerous Metropolitan Court judges. I have seen and experienced the knowledge, discipline, and organization needed to be successful in this position. I have also learned through observing many judicial styles and demeanors. My integrity, my ability to be objective, and my even keeled nature will make me successful in this position, and I am asking for your vote. Thank you.