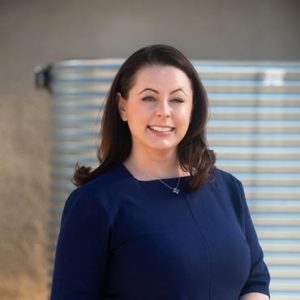 One of the most exciting legislative contests this 2020 election is Katy Duhigg’s race in Senate District 10 to oust the Republican incumbent, Candace Gould.

Katy, a consumer-protection and election-protection attorney, is firmly set to flip this Senate seat blue for the first time in almost two decades! Katy was born and raised in Senate District 10, and has been serving her community for many years, most recently as the Albuquerque City Clerk, where she revamped the City of Albuquerque Ethics Code. Katy is the former vice president of Common Cause New Mexico, a nonpartisan, grassroots organization dedicated to fair elections. She’s also a member of the Bernalillo County Code of Conduct Review Board, and the Bernalillo County Valuation Protest Board.

Katy organized New Mexico’s first state-wide nonpartisan election protection program in 2008 and was recognized by Common Cause New Mexico in 2018 with a “Special Board Recognition Award” for her work on fair elections at its Best in Government Awards Annual Luncheon. As the Managing Partner of The Duhigg Law Firm, she fights for hard-working New Mexicans in cases against multi-national companies like Wells Fargo, private prisons, and insurance companies.

A first-time candidate, with fresh new ideas, Katy can beat Senate District 10’s incumbent, Republican Candace Gould. Gould only won in 2016 by the skin of her teeth and has spent the last four years casting Republican party-line votes:

Candace Gould voted to gut protections for pre-existing conditions that would make it easier for insurance companies to kick people off their health care.  She voted against repealing the archaic abortion bill that would make women and their doctors felons. Gould also voted against common-sense gun safety legislation and in favor of union-busting.
Candace Gould’s votes consistently put big corporations and their profits above hard-working New Mexican families.

Katy is running a smart, strong campaign, and can overturn this seat, but in order to do so she asks for your support. Because of COVID and the inability to go door-to-door, it’s necessary to hit the phones hard. Reaching the voters isn’t easy these days, but just a couple hours volunteering will make a big difference in a district like this.