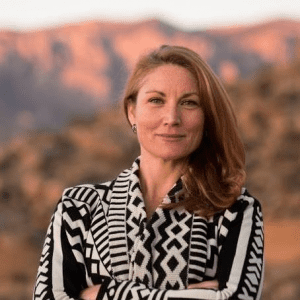 After the 2016 election, convinced that she needed to do something for Albuquerque, where she was raised, and for the troubled country, Melanie Ann Stansbury began attending political meetings and found herself running for office for the first time. She surprised everyone by winning with her potent combination of knowledge and expertise, and her skill at connecting with voters.

Rep. Stansbury credits that 2018 victory to a wave of involved people volunteering in her campaign, including many who had never been politically active before. Now, in this critical time: “We must make sure,” she says, “that we hold and extend our blue wave in 2020.” She also warns against complacency and about dark money coming from out of state to defeat people like her.

Trained in sociology and in economic development, Melanie Stansbury brought considerable budgeting expertise to her first term in the legislature. Her background includes working as a consultant with national, state, local, and tribal governments and non-profit organizations that serve the public. She also worked for the U.S. Senate Committee on Energy and Natural Resources and in the Obama White House’s Office of Management and Budget before returning to the southwest.

Aside from sitting on the all-important NM House Appropriations and Finance Committee and helping to draft our state’s budgets in one special and two regular sessions, Rep. Stansbury sits on other committees of importance to every New Mexican: Energy, Environment and Natural Resources and the interim committees on Water and Natural Resources and Science, Technology and Telecommunications.

Her four priorities for her second term include:

She notes the importance of the redistricting that will occur following this year’s census. And she also points to the importance of supporting small businesses (she’s the owner of one) as an economic stimulus for the state.

Rep. Stansbury allows that New Mexicans, like citizens in every state, may have become disillusioned with politics, but believes that new people, such as the brilliant crop of community-minded, change-oriented women elected around the country in 2018, will change that disillusionment to pride and involvement.