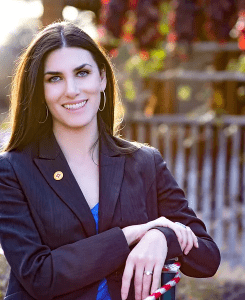 This fall, voters in District 15 will have the chance to re-elect Dayan Hochman-Vigil for the State House of Representatives. After only one term, Hochman-Vigil has already introduced and passed legislation (The Safer Communities Act) that garnered bipartisan support all the way to the Governor’s office.

That bill, which addressed criminal justice issues, reflects Hochman-Vigil’s belief that the best way to reduce crime and recidivism is to go to the root causes.

“Every crime has a cause and is a kind of coping mechanism,” she says. “[It’s] due to poverty, generational trauma, people not getting the same kind of justice.”

To this end, Hochman-Vigil plans to work with allies and colleagues from both sides of the aisle to create the Mental and Behavioral Health Reinvigoration Act. The 2013 debacle Susana Martinez created by shutting down two-thirds of all behavioral health facilities in the state caused not only needless suffering and an increase in deaths by suicide, it was followed by an uptick in violent crime.

Hochman-Vigil objects to the term “defund the police” because she thinks it sends the wrong message, as if calling for a complete repudiation of law enforcement. Instead: “We want to retrain [police] in crisis intervention and case management to stop the maladaptive coping mechanisms—survival crime. We also need to put money toward social work and housing availability.”

Hochmann-Vigil would like to diversify the economy by bolstering New Mexico’s fledgling Aviation and Aerospace industry. With Space Port, two national labs, and several major universities, she maintains our state already has the infrastructure to make the most of this opportunity:

“Forty percent of New Mexico’s revenue comes from oil and gas, and this downturn has really cost us, especially combined with the Coronavirus,” she says. “If we brought in big investments in Aerospace we could get some good revenue and leverage opportunities with NMSU and UNM to bring in young people and make New Mexico a leader in STEM and the Aviation industry.”

Hochman-Vigil’s office is no safe seat, having been represented over the years by Republicans and Democrats in equal measure. But Hochman-Vigil believes she can best represent the constituents of this district, which spans the west side, North Valley and Northeast Heights.

“District 15 has a lot of working families who are concerned about their health insurance, who want their fair crack at the American dream through a fair tax system. People believe in collective bargaining and the right to unionize.”

All issues that Democrats are uniquely positioned to address.

“We need public servants who are close to their communities and reflect the values of the constituents they serve,” says Hochman-Vigil. “I have a proven track record of making myself available to listen to the people here.”