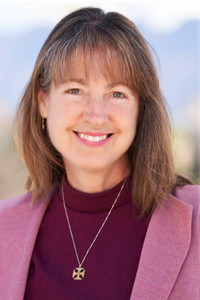 Focus on: Athena Christodoulou for NM Senate (District 21) and the Promise of a Smarter, Safer, Stronger New Mexico

At the last three NM legislative sessions, Athena Christodoulou has been on the scene, advocating for clean energy and a diverse economy. A technology entrepreneur and leader, she is the immediate past President of the NM Solar Energy Association. She’s also a retired Navy engineer who, while completing her second master’s degree, led her team to win the UNM 2012 Technology Business Plan Competition and jumpstarted the 2013 UNM/ASU Solar Decathlon team. Then and now, Athena’s knowledge and values have made her a strong proponent of a triple bottom-line business model: People, Planet, Profit.

With a Bachelor’s degree in civil engineering, a Master’s degree in environmental engineering, and a Professional Science Master’s degree, Athena has the acumen to evaluate challenging issues – from climate change to COVID-19 – based on evidence and science. And she has vision toward a greener, safer future: “While we work to keep ourselves healthy for the coronavirus pandemic, we should put in place the systems to keep our environment healthy to avoid an even more disastrous climate calamity.”

By way of comparison, Athena’s Republican opponent, Mark Moores, began pushing, back in April, to relax Gov. Michelle Lujan Grisham’s measures to slow the spread of the coronavirus. Timing-wise, Moores was totally in step with President Trump’s attempts to downplay the pandemic and ignore hard facts: “Either the models were wrong, or we did an even better job than we thought we could,” he said, minimizing COVID-19 deaths and hospitalizations (Albuquerque Journal, 4/21/20). And, at the first special session of the NM legislature, Moores and three other Republicans introduced a bill aimed at weakening Lujan Grisham’s program by eliminating civil penalties for violations of the public health act.

With Athena Christodoulou, Senate District 21 can leave Moores behind and look forward to a more enlightened and empathetic voice speaking for and helping to shape the future of our state. That’s because, while Athena begins with a scientific and technical focus, her perspective on public service broadens to readiness for honest, compassionate and thoughtful community leadership.

As an NM Senator, Athena would stand for equality, integrity, unity and other important values from the Democratic platform. She’s been endorsed by Gov. Lujan Grisham and the NEA, and is a Moms Demand Action Gun Sense candidate. She’s keeping a strict distance from oil, gas and coal execs, lobbyists and PACs. She has the drive to work locally and the vision to think globally – about people, the planet, and a path to prosperity for all.