As I write this, the US has just surpassed all other countries except Italy and China for the most cases of coronavirus, or COVID-19, and the number of cases will certainly have increased much more by the time you read this. 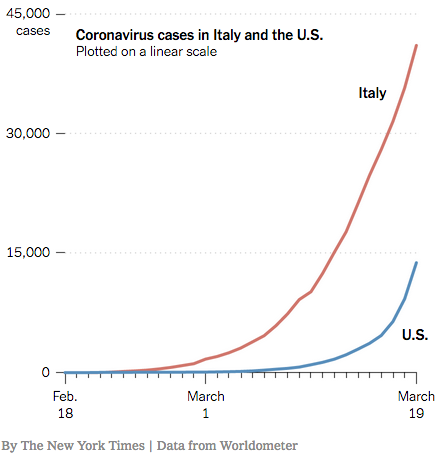 I’m frightened by the curve, and by early statistics from Italy indicating a death rate of 9.3% among those diagnosed with the disease.

Leaving aside the apparent mismanagement of the early course of the disease in the US and the lies coming right from the top and the closing of the White House’s Pandemic Preparedness Office, let’s look at a couple of scenarios based on our country’s two political parties’ health platforms.

The Democratic Party states (https://democrats.org/where-we-stand/party-platform/ensure-the-health-and-safety-of-all-americans/) that it wants good health care to be available to all Americans, pointing out that it was responsible for passing Medicare, Medicaid, and the Affordable Care Act.  It stands behind the ACA, including its popular Medicaid expansion, its elimination of insurance denial for pre-existing conditions, and its coverage of dependents until age 26.  All Democratic governors expanded Medicaid and set up insurance exchanges; some Republican governors followed suit. The Democrats’ 2016 platform emphasized support for the “nation’s crumbling public health infrastructure” and for community health centers like Albuquerque’s First Choice or Santa Fe’s La Familia.

The Republican view (https://www.republicanviews.org/republican-views-on-health-care/) emphasized health savings accounts and “choice [among bad alternatives?].” It advocated repealing Obamacare and replacing it with, well, health savings accounts.  And more competition among private insurors. Public health and community health centers were not mentioned. By the way, it supports abstinence-based sex education, which has been shown not to work. Competition has been shown not to work in health care either.

According to a recent article in the New England Journal of Medicine, passage of the ACA resulted in 25.6 million more Americans having health care insurance than would have been the case without.  [It’s still a travesty that 23 million Americans lack health care coverage, not to speak of non-citizens within our borders.] Coverage is obviously good for patients, especially for those who might be stricken by a formerly unknown disease.  It’s also good for hospitals, especially rural ones which would otherwise deal with an influx of very sick, uninsured patients.

If the Democratic platform had been enacted by a Democratic president and Congress, the public health establishment would have been strengthened and we’d have had better supplies and better preparation for this epidemic.  President Obama had established an epidemic response team; the next president disbanded it. All Americans would have had available health care, and there wouldn’t have been anxiety over testing and personal protection availability.

If the Republicans had been able to repeal Obamacare and replace it with their vaunted American Health Care Reform Act, far more uninsured COVID-19 patients would have hesitated to present themselves for testing or treatment until they were very ill and had exposed a great many contacts to the disease, and many hospitals would be deep under water, coping with a vast number of emergency patients with no funding.

We’re all suffering from COVID-19, whether ill with it, eventually ill with it, or just hunkering down, hoping to avoid it.  How much better it would be if Democratic proposals for public health support and universal coverage had been carried out! How much worse it would have been if the Republicans had been able to overturn the ACA and replace it with…  medical savings accounts and competition!