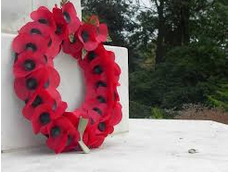 Memorial Day 2020 is now a part of history wherein the coronavirus had an especially devastating effect on our country: no concerts in parks, no parades of marching bands and veterans, no large gatherings at public places. This year we not only honored and mourned those who died in the U.S. Armed Forces, but also those we have lost to this disease. Some of those included veterans who died in Soldiers Homes and nursing homes.

Initially called Decoration Day and fostered by women to honor the fallen soldiers of the Civil War, the name later changed to Memorial Day to include all those killed in combat and declared to be held on the last Monday in May.

My father served shortly after WWII ended. I remember how Memorial Day was revered back then: Veterans of both world wars proudly walked down Main Street USA, waving to the crowd during the annual parades. Poppies were worn in lapels and handed out to enthusiastic spectators.

Over time, Memorial Day has been conflated with Veterans Day — the former to honor the dead, the latter the living. Yet in today’s era, Memorial Day largely means a summer rite of passage, a long weekend consisting of car sales, cook-outs, and camping.

New Mexico is strong in military history. In World War II it had both the highest volunteer rate and the highest casualty rate out of all of the forty-eight states in the Union at that time. Almost 50,000 men and women were from New Mexico. In 1942 heavy losses were felt as the result of the Bataan March. After the Japanese defeated the Allies in the Philippines, our soldiers were made to march 65 miles with very little food and water, suffering unspeakable torture and death. Nearly half of the 1800 troops never returned home. In their memory we have a newly renamed Las Cruces Bataan Memorial Clinic.  U.S. Representative Deb Haaland (D-NM) attended the ceremony and stated “By naming the veterans clinic in Las Cruces in honor of the Bataan Death March, we keep the memory of those brave service members alive.”

“In 1965 my dad came home from Vietnam, I realize now that I was one of the lucky ones. While this Memorial Day is different because we are apart, it is no different in its significance,” continued Rep. Haaland. “Today is meant to deeply reflect, respect, and honor the soldiers who never made it back home, as well as the sacrifices their families made.”

For a comprehensive list of (and links to) organizations serving veterans locally in Albuquerque, statewide, and nationally, go to https://www.cabq.gov/veterans-resource-center

To visit our military museums in New Mexico, click HERE.